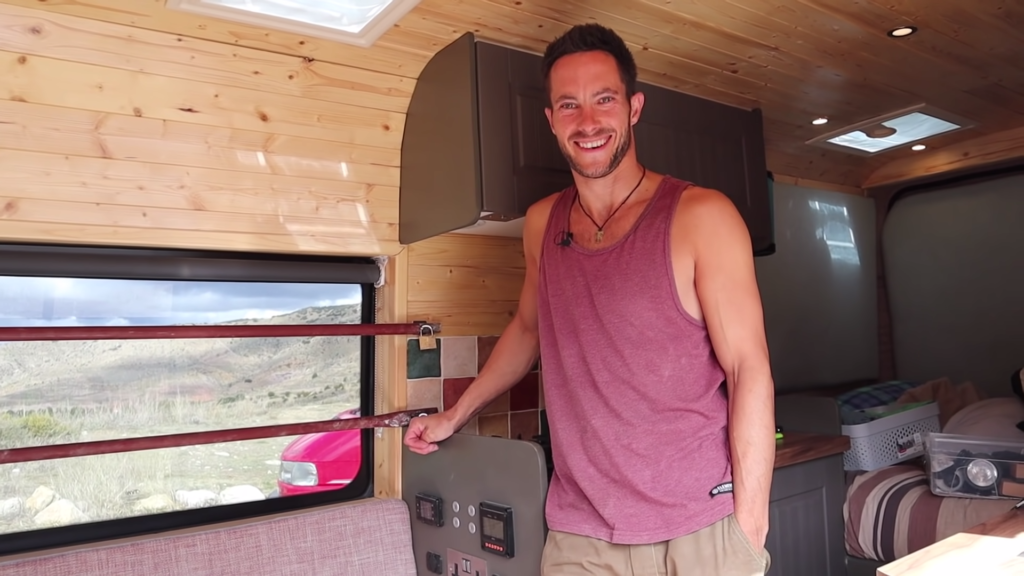 While the world is undoubtedly a beautiful place, it can also be pretty nasty at times. Unfortunately, break-ins and burglaries are commonplace for van owners. In fact, research from Powertools2u suggests that in the UK alone, a van is broken into every 23 minutes! So whether you own an RV, campervan, or motorhome, security is not something you can afford to skimp on.

It goes without saying that insurance is a must. Break-ins don’t just affect your possessions, they can also destroy your livelihood, capacity to make income, and sense of security.

Alongside insurance, there are tons of safety measures you can implement. Here’s 10 of my favorite!

Windows are a common point of entry for burglars. All it takes is a heavy object, such as a brick or a crowbar, to smash the glass and instantly a burglar has access to your entire home.

My friend John came up with a great solution to this. In his van, he installed a series of window bars made from steel pipe. The great thing about these is they’re removable. So while they drastically increase security, you don’t have to feel like you’re living in a prison cell.

The benefit of the bars is two-fold – they’re visible from the outside so they act as a strong deterrent, plus their positioning physically prevents someone from climbing into the van.

The most obvious way for a burglar to gain entry to your van is by picking the door locks. Unfortunately, lock-picking is nothing new, it’s been happening for centuries. But Gabriel and Helena have come up with a comprehensive way to minimize the damage caused.

In their van, they installed a series of hooks on each door. When inside the van Gabriel uses a metal chain to connect one hook to another. Essentially this means that even if a burglar manages to break the locks, they won’t be able to open the door.

He applies a similar principle to the side and back doors too. At the back, he uses two open hoop loops to lock the doors together. Again, this means from the outside the doors cannot be opened, which in turn prevents anyone from getting in.

The third security hack goes without saying… a hidden vault for your valuables. These range in price from £100 to £300 depending on how advance you want it to be.

If you’re traveling with laptops, GoPros, cameras, drones, passports, or other expensive items, you need to get into the habit of locking them up every time you step away from the van.

For maximum effect, the safe should be completely out of sight, i.e. under bench seats or in a cupboard. It’s also a good idea to affix the safe directly to your van, such as by screwing it to the vehicle chassis. This means that a burglar cannot physically remove the vault and make off with it.

What do you do if it’s the middle of the night, you’re asleep in your van and you hear somebody outside tampering with the locks? Well, you could confront them. But they may be dangerous or even have a weapon.

Alternatively, if there’s an opening between the front and back of your van you could jump into the driver’s seat and drive away. This is exactly why Robbie included an archway in his van design.

Robbie’s van also features a blackout curtain that pulls down over the archway. This ensures that anybody peering in through the front cabin windows can’t see through to your living space, which is a deterrent in itself.

Located at each side of the van above the front doors, the lights are designed to monitor movement when it’s dark outside. They’re based on the principle that most burglars prefer to work when visibility is bad.

Since lighting increases a burglars’ chance of being seen, they serve as a strong deterrent. In this scenario, LED security lights are beneficial because they are more energy-efficient than conventional light bulbs.

If a thief is planning to drive away with your entire van, they want to do so as quickly and efficiently as possible. One sure-fire way to slow down an intruder is by using wheel clamps.

John raises a valid point that it’s all about opportunity. You don’t necessarily have to worry about making your van 100% burglar-proof, you just need to go one step further than the other guys.

If a thief sees two vans lined up, one with a wheel clamp and one without, common sense dictates that they will go for the one without the clamp.

If the worst-case scenario comes true and somebody manages to make off with your van, you want to make sure you have the maximum chance of recovery. The best way to do this is by following in the footsteps of Gabriel and fitting a GPS tracked alarm system.

Gabriel’s system monitors motion inside and outside the van. If somebody starts fiddling with the locks, the alarm will sound and the system will immediately send a notification to Gabriel’s phone. From there, he can track the vans coordinates to see where the thief is driving it.

This makes it much easier for the police to recover your van before it’s too late!

In addition to van theft and possession theft, something that’s becoming increasingly common is fuel theft. Unfortunately, due to the rising price of fuel some people have started to take drastic measures.

Most modern vehicles have already started to implement fuel cap locks, but this leaves older vans particularly vulnerable. Gabriel came up with a clever way to counteract this. On his van, he added a small door over the diesel fill-up point. The door can only be opened when the main vehicle door is open.

So we’ve discussed Gabriel’s innovative method of securing your vans front doors using hooks and a chain, but what about the sliding side door? Is there any way to protect this?

Yannick, a carpenter from Germany, came up with a cheap and simple solution. On the track for his vans sliding door, he drilled a small hole. Now, whenever he leaves the van, he puts a padlock through this hole.

Essentially, the padlock acts as an obstacle and prevents the sliding door from being opened.

Last but not least, we’ve got good old-fashioned steering wheel locks. Wheel locks have been used to prevent car thefts since the early 1920s. Nowadays, they can be picked up for anywhere between £15 and £100.

As well as being a good visual deterrent, wheel locks jam the steering wheel and stop it from being moved. Without access to your steering wheel, it would be pretty hard for a burglar to drive off with your van!

There you have it, 10 simple but effective ways to secure your van and minimize the chance of theft. Which hack do you like the best? What’s your vans security system like? Let me know in the comments section!