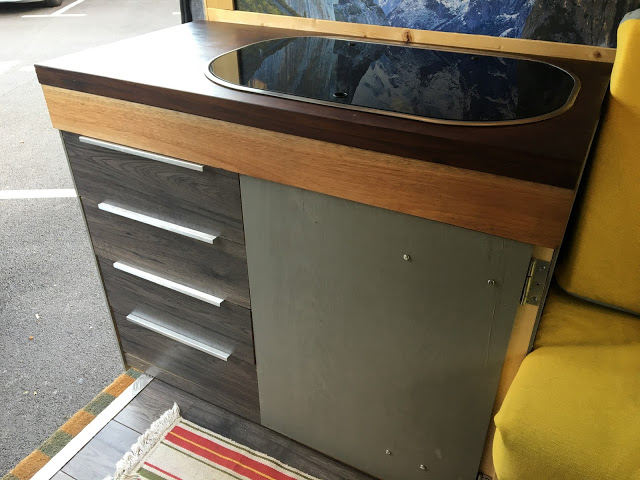 The kitchen unit has to contain a lot in my van conversion. It contains the water and gas system all in one!

My kitchen unit over hangs the step a little, people criticized this as being a bit strange but I am really glad I did it.

It has given me a couple of inches extra width in my cupboards and, importantly, on my work top. Without this cooking would be that little bit harder. It also means that the big recliner chair is, well big and you do not feel squeezed against the kitchen unit.

The space it takes is essentially dead space.. but you cannot have it too close to the door else you cannot reach the handle to open it!

Water system & under the kitchen sink

Two 20 litre water containers, fresh water and waste, waste in to the Jerry can. Also the big yellow LPG tank. The bungees work well keeping the water tanks in place.

I screwed the block work in to the floor or the bulkhead behind the unit. This was also attached to the seat unit block work (underwhich would contain the heater).

Using the gas canister and the two 20ltr containers I was able to precisely workout how much space I could get away with using for my drawers.

Once done, I added panels to the back and sides to give it structural support.

I made the door using some old hinges I had from a previous project. These were easy to adjust to make sure that the door swung correctly.

The door was just painted with some grey pain I got from Ikea, turned out I should have primed it, and it took about 8 coats to look good. It did the job and I was not in the mind to loose time to go shopping for primer.

I wanted a nice hardwood kitchen top – the sort you might have in a nice kitchen at home! Fortunately I was able to find some reclaimed mahogany which used to be part of some school book shelves.

I used two layers of these and after sanding them down, glued them together using lots of G clamps and a few screws for good measure.

Once done I cut the sides down to size and cut the hole for the sink unit and spent a long time sanding.

I also used a scraper (cabinet makers use it for furniture) to get out some of the deep scratches that unruly school children had left in the surface.

I saved some of the wood dust from sanding, mixed it in to some wood glue, and used it as filler for any holes in the wood.

I used Danish Oil, the same oil I used for the rest of the van. A bit of online research suggested it is safe enough for food. Do check yourself based on whatever you buy!

As the kitchen top is often wet I went to town on the Danish Oil – until it would no longer take any more. It has worked really well so far!

The oil made the kitchen top quite a bit darker than the untreated mahogany, but it works well with the tone of the redwood front and oak-flooring drawer fronts.

Two burners are useful, three would be unnecessary for my needs. The empty burner space leaves a good area to leave a sponge! The electric tap is great – definitely better better than getting a hand pump.

There are a whole range if water pumps available.

This is the one I used - it is a Reich 18 Litre Per Minute 12 V Submersible Water Pump.. just be sure your water containers can fit it in.. I had to file the neck of mine to be a little larger so it would fit.

I found making the drawers really boring – but I liked the effect they had when finished.

The photo below shows the basic drawer structure. Back, sides and a base. Glued and screwed to four blocks in the corners. The front is screwed on and is made from wooden flooring.

Lastly the handle is an Idea bought handle I simply screwed on.

I got 45cm drawer runners and attached them to the bottom edges. These are available from a number of places, I think I got mine from Amazon. They come in packs of two, so I just needed 4 packs.

The drawer-side runner sits about 5mm from the front of the on the draw.

Inside the kitchen unit I added another upright to allow me to attach the drawer runners and just spent some time attaching and adjusting them so they ran nicely.

I used Ikea drawer handles – they simply screw in and look super modern awesome cool and stuff. I like them.

I cut a hole in the roof for the extraction fan – it has to sit within the runnels else the rubber seal will not work. On a transit this means it is quite going to be central – but that is OK the cooking unit is to the left a little anyway.

The extractor fan simply has to fit in to the hole and be screwed to the vent part. I had to find some longer screws for it to reach. The added insulation and cladding meant the screws that came with the unit were not quite long enough.

This was the mushroom vent I used:

I bought it here.

It is one of the few 12v vents I could find online – and to be honest it is not the best product. It is however quite discrete and aids the stealthy aspect of the van – most other extraction fans look distinctly ‘caravanesque’ and therefore were not suitable. They also tend to be a little on the expensive side.

It is quite loud however, so it is not the best – there might be a way to dampen the noise it creates against the woodwork – but for now I will just put up with it.