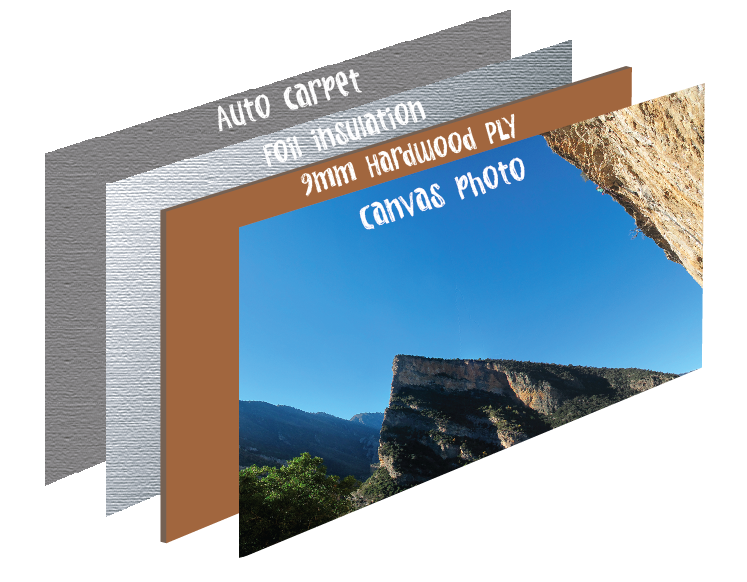 The slider is part of my 'new' bulkhead.The slider serves three purposes:

The slider was made with the following layers;

I spray glued and staple gunned the insulation to the wooden panel. It is 1.5cm narrower than the slider area to make it easier to use.

Then I applied the canvas image – this is a photo of Yosemite – where some of my longer term climbing goals are. Using a liberal amount of spray-glue on the wood and carefully, from one side smoothing and rolling the image on to the wood.

The canvas photo was purchased online and it was bought (without a frame) for about £50.

I then put on the auto carpet – also stapled on the sides and glued.

Adding the handle was pretty easy (the holes in the wood were pre drilled). I used a scalpel to cut the hole in the canvas for the bolts to go through.

Fixing the slider up

The slider is fairly heavy and I originally added two push-fit clips to the top of it. These mostly holds it up, but not with vibration of driving. So I just have a bolt that I slide in - behind the recliner seat which locks the panel in place.

I leave a neo-dynium magnet on the back of the bolt so I can just attach it to a screw when it is not in use.

Bolt that stops the slider moving, and right – a magnet holding it to a bolt so it does not get lost.

I was really happy with the slider aspect of the design. It has worked really well and being able to have an isolated place to dry towels or put a solar shower to warm up has been useful.

I broke my leg and the plastic boot I had to walk in got fairly smelly – it was nice to be able to get it out of the living space at night! Same goes for climbing shoes sometimes.

Slider handle – just bought from a DIY store. Screws in from the back.

The slider when down.