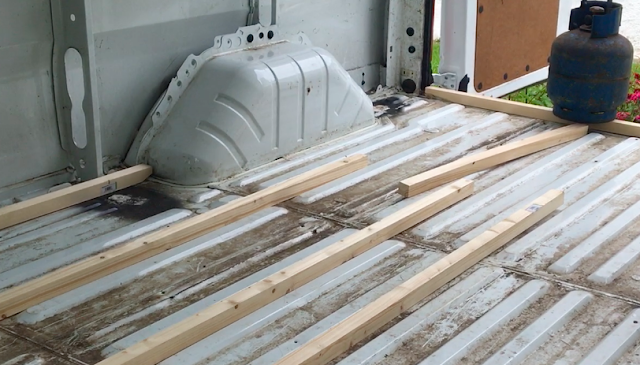 Although you can use some kind of spray foam to do a whole layer of insulation – I decided that the more standard methods would be easier, probably cheaper and easier to add more layers to.

Everything I read about van conversions banged on about insulation as being super dooper important so I doubled down on it. Some people go super nerdy on it, I started to try and work it out, but then just decided to put in as much as was practically possible.

In general I did not want to loose too much height so there is a bit less on the ceiling and floor. As it is, if I stand straight my hair just brushes the roof – It would not have been good to loose another inch.

For the floor I put in wooded block and glued it down, with the shape of the base of the van it left just the right space to put in insulation board. I screwed the plywood down on top of it (a new ply base came with the van).

Being lazy I just cleaned the hard-to-clean dirt from where I needed to glue batons!

For the walls and the roof the shapes tend to be a bit awkward but my general process was as follows;

1. Measure and cut the shape out using a jigsaw

2. Place it in, ideally it is just a little too big so it wedges in

3. Use spray foam as ‘cement’ and fill in any gaps (using the gun grade foam)

This also worked on the ceiling, which saved having to prop the insulation panels against the roof for ages while glue dried. Wedging it in and using the spray foam was really quick.

Using the expanding foam as a fixant worked really well and was quick to do. The box work (at the top of the photo) needed various pieces to be cut, slid in and tessellated until it was full. I then used foam gun to fill in any gaps.

Gluing in the foam board insulation with the spray gun

Note: there are some areas of ducting, especially around the doors, which have functional mechanisms in (locks/access to lighting etc) – just check you are not filling something that one day you will need to access.. or you will have to spend half a day trying to dig-out because the door no longer locks!

Above, this is the van 70% insulated. At this point I have half applied the foil to the van.

Notice the slots in the foam around the electrical conduit. This could probably have been less, but I eventually just filled it will foam gun in the end anyway.

The van is looking a bit of a mess at this time but don’t be disheartened – this is the major preparation stage and, once finished, everything you do starts to make it prettier!

A tip for applying the foil insulation

I used some old screws, pushing them through the foil and into the foam insulation behind it; its super fast.

A whole load of these and the insulation is quite effectively attached. I then used gaffa tape to seal up the edges.