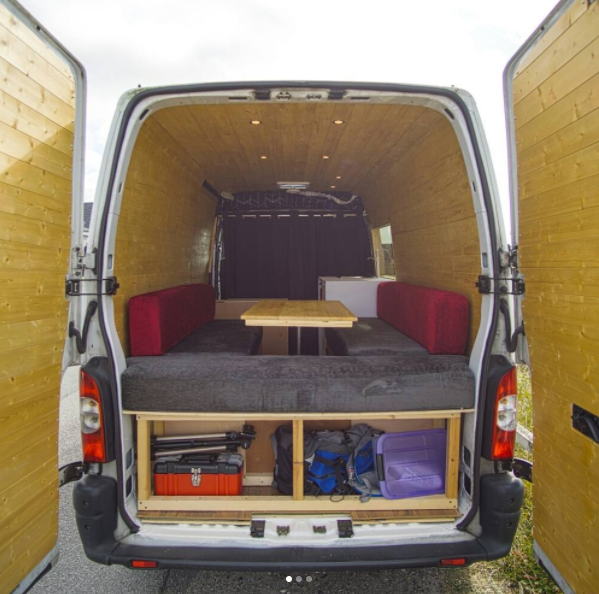 Sam Balmforth made this camper van over a few weeks - partly with the help of my van conversion guide. I interview him to get all the useful details.You can out his adventures on Instagram here and see my interview with Sam about his build below!

What do you do when not doing van-life? I'm hoping to work within the land/minerals surveying field after I undertake a masters in Cornwall in September, though for the last year I have been working in marketing.What made you decide to convert a van for travel? It seemed like a good investment for the years to come - namely low cost travel. I spent a month interailing last August around Europe and realised that asides from the cost of accommodation it can be a bit of gamble booking x amount of nights in a given location, you may want to spend much longer or much less time when you actually get there.Having a camper van gives that ultimate flexibility and also allows you to get out of the cities into the rural areas, which are a much bigger draw for me.

Do you travel for a long period of time? If so, any funding/life management - any tips or ideas?I haven't done masses of long term travel only the month in Europe and the current month I'm spending touring Norway. My thoughts would be try and take into account the cost of living in the country/countries you want to visit - fuel, food etc and save up enough funds to make that trip a reality. When I am travelling I usually keep a mental note of daily expenses, thereby if I go over a rough daily budget one day I can try and reduce a cost the next, common sense stuff really!For van travel a rainy day fund is also a good idea, as you never know when the van may encouter mechanical issues (roadside coverage is pretty fundamental as well). Also stock up on foodas much as possible before heading off - I'm glad I did that before heading to Norway.What was the most challenging part of the conversion?There are so many to choose from, the whole project has been a massive learning curve as I had practically no DIY experience! I guess for me the electrical side of things, I left this till last as was worried I'd seriously mess things up, though it was still at the back of my mind during every stage of the build. It turned out to be pretty straight forward once I read up a lot - your ebook diagrams were especially useful!Did anything go horribly wrong?Yes, after I'd installed the buld of my electrical system: batteries in parallel, solar setup, lights, usb sockets etc I was wiring up my 12v fridge... When all of a sudden I noticed smoke coming out of my charge controller! I panicked and quickly disconnected it and my god it didn't half smell foul, after taking it outside I then retraced my steps - trying to find out what I'd done wrong (as I presumed it was human error). After running though eveything with no avail, I contacted the company I bought my solar kit from and explained what happened, sent them pictures of my set up and they informed me it was a faulty unit and issued a replacement and I sent the faulty unit back to be diagnosed.In a way I would have preferred the issue to have arisen as a result of an honest mistake myself, as then I could have learnt from it. That episode has made me a tad anxious about the quality of charge controllers even though this was the first recorded incident with the particular model and the replacement has been working with no problems... touch wood!If you had one key piece of advice for someone thinking of doing a conversion, what would it be?It can be quite overwhelming doing a conversion, at some stage you'll encounter "analysis paralysis" I can't remember where I heard this term but it basically its where you are trying to take too many factors/stages of the build into account and end up getting nothing done. Try to break the build down into small chunks rather than one massive puzzle.Did you install a solar and/or a split charge system?Yes I went for both, LG 250w panel and 35a charge controller and a heavy duty VSR split charger which have proved fantastic and provided more than enough power.What are you most happy with the build?My seating area/bed - I feel like I maximised the space I have as best as possible.Being 6 ft 2 I knew sleeping widthways was out of the question from the start, though I wanted a seating/dining area as well. With my setup I have plenty of storage under the two benches and a table that can easily cope with 5 people around (though so far the max I've had is 3). The tableleg is removable giving a massive king sized bed or I can tuck the table behind the passenger seat giving a U shaped seating area.

(If ok to ask) How much did the conversion cost you in total?I haven't properly totted everything up but I'd say in the region of £4000 +/- £500.How long did it take you to convert it, any estimate on the number of hours spent?I got the van back at the end of February and pretty much finished it by late June so about 4 months, working on weekends and after work as well as a fair amount of time I took off work. Hours spent actually physically working are far fewer than the hours spent researching online and head scratching haha. Though accumulatively in the region of a few hundred hours or so!Where are you off to first?!Norway, I've spent almost two weeks here touring from Kristiansands to my current location near Andalsnes. This country is stunning, I've never considered myself much of a hiker but Norway has some of the most picturesque landscapes which are perfect for it. My plan is to continue further North and ultimately end in the Lofoten Islands!Thanks Sam! Enjoy your adventures!--Get the Van Conversion Guide: